My previous post on this blog was published by the end of the long-gone month of June. Many things have changed since then, for example, I entered university and was pressed into creating a Facebook account (more or less separate from the rest of my online presence, so don’t look for me, I won’t add you). On that post, I rambled about the recovery from a big server outage that costed 42 hours of tny.im downtime, and over one week of server downtime. I learned my lessons (I doubt BlueVM learned theirs, but that’s a whole other story), and I went forward with what I said I would do: “setting up a new advanced and redundant system” for ensuring tny.im is always up.

That system has been up and running for over two months now, with varying amounts of servers making the redundancy and load balancing, and a plethora of occasional hiccups. Right now it’s composed of three virtual servers (all from different providers…), but there were times when it was composed of five servers. These three servers are paid, and while they aren’t exactly expensive (but not the cheapest, either), you can imagine the bill, so let’s not talk about tny.im profitability now, OK? (I have kind of given up).

In the spirit of the great statisticians of our time, here’s a graph without title, labels or axis.

However, having three servers serving the same website, with all three of them being almost a clone of each other (which means, all have the same files and database contents, synced), in a DNS round-robin setup doesn’t directly lead to greater uptime. In fact, I have found out it can lead to more outages, since now the total downtime is approximately the sum of the downtime of each server. Of course, most of these outages are partial (as in, only users unlucky enough to have their DNS request resolved to the IP of a server that is down, will actually perceive the site as down), except for when the MariaDB replication freaks out and basically grinds all database operations, on all servers, to a halt, requiring a complicated manual restart of all MariaDB instances, in a specific order (yes, I have spent many hours searching for an alternative database system, and couldn’t find any that met my requirements).

In order to actually achieve greater uptime, one must have a system that automatically manages the DNS records so that the domain(s) of the website in question never have any records pointing to servers that are down. In other words, the “sheep” must be “hidden from sight” as soon as they go “bad”, and should be put back “in stage” once they become “good”. Being DNS something that was definitely not made for real-time record edits, with many systems caching DNS request results well beyond the specified TTL, this system obviously doesn’t ensure that the “bad sheep” are not invisible to everyone watching the show. But if it manages to do it for even a small percentage of the public, it’s already better than not hiding from anyone (and especially, if it successfully hides the problem from the uptime monitor, that’s even better 🙂 ). This explains why the DNS records for tny.im are set with TTLs of five minutes.

The development of such a DNS record management system was also more or less contemplated in my previous post, when I say:

I’ll take this downtime and new server acquisition as the motivation for setting up a new advanced and redundant system, so that if one server goes down, tny.im (and possibly this blog too) will continue to operate as normal.

And in the end, in a later edit:

On related news, Mirasm – the Tiny Server Redundancy Manager – is mostly finished, only needs some more testing to be put on production servers, managing the new tny.im redundancy system.

“Mostly finished”, as we all know, really means “It’s 99% ready, I only need to figure out the remaining 1% that consists on… everything that is tricky and I’m not sure how it’s done”. This is specially true in this case, as I had high requirements for my manager: it couldn’t use any resources other than the servers I had already (it would’ve been easy to have a separate server just for monitoring and editing DNS as needed, but I didn’t want to pay for yet another server on yet another provider), and it couldn’t fail more than tny.im itself. In fact, the time when the manager has to do more important work, is when it is not working, i.e. when a server goes down and so goes the manager. I finally finished the project, and it works as planned. I only got the name wrong…

Pronounced “m-eh-rs-ee-t”, with the first “e” being like the one in “explain”, mersit is a simple Python script (Python 2.7, because I wasn’t sure what libraries were available for 3.x nor if my servers would run it well) hacked together with some sections that definitely look like spaghetti code. The good news is, it works fine, and has been well tested, so if you study it in the “black box” way, there are no big problems with it.

The purpose of the script is to manage the DNS records of the website served by the group of synced servers, in this case, tny.im. It runs on each server, in a peer-to-peer fashion. The peers select a single master, that will monitor all the peers and manage the DNS as they go up and down, “deciding who’s on stage”, and all peers will check whether the master is up, and select a new one that will edit the DNS to “hide the master from the public” when it goes down.

I definitely want to open-source mersit at some point, but not now because it’s not ready for prime-time (see “spaghetti code”, above), and I want to change some things that will make it more general-purpose. mersit has been managing the live records for tny.im for the past week (it’s been peaceful). 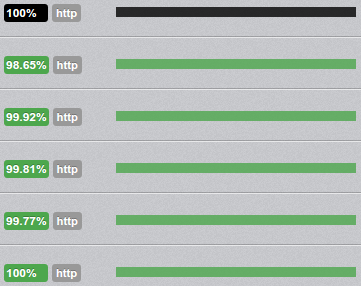 Continuing our journey through the world of meaningful graphs, here’s another.

I have gone so far as to write a read-me for mersit (mainly for me to read, as I know I’ll forget how it works within six months). I think it’s best if I put the start of the read-me here, instead of trying to explain it all, once again:

The part related to DNS records is not explained on the read-me, because it is related to the handlers (which each mersit user would customize to the specific needs of the system – as I said, I tried to make it a general-purpose script). Sounds interesting? Feel free to ask questions, or point out problems, in the comments.